Back to Tourism MAP GUIDE 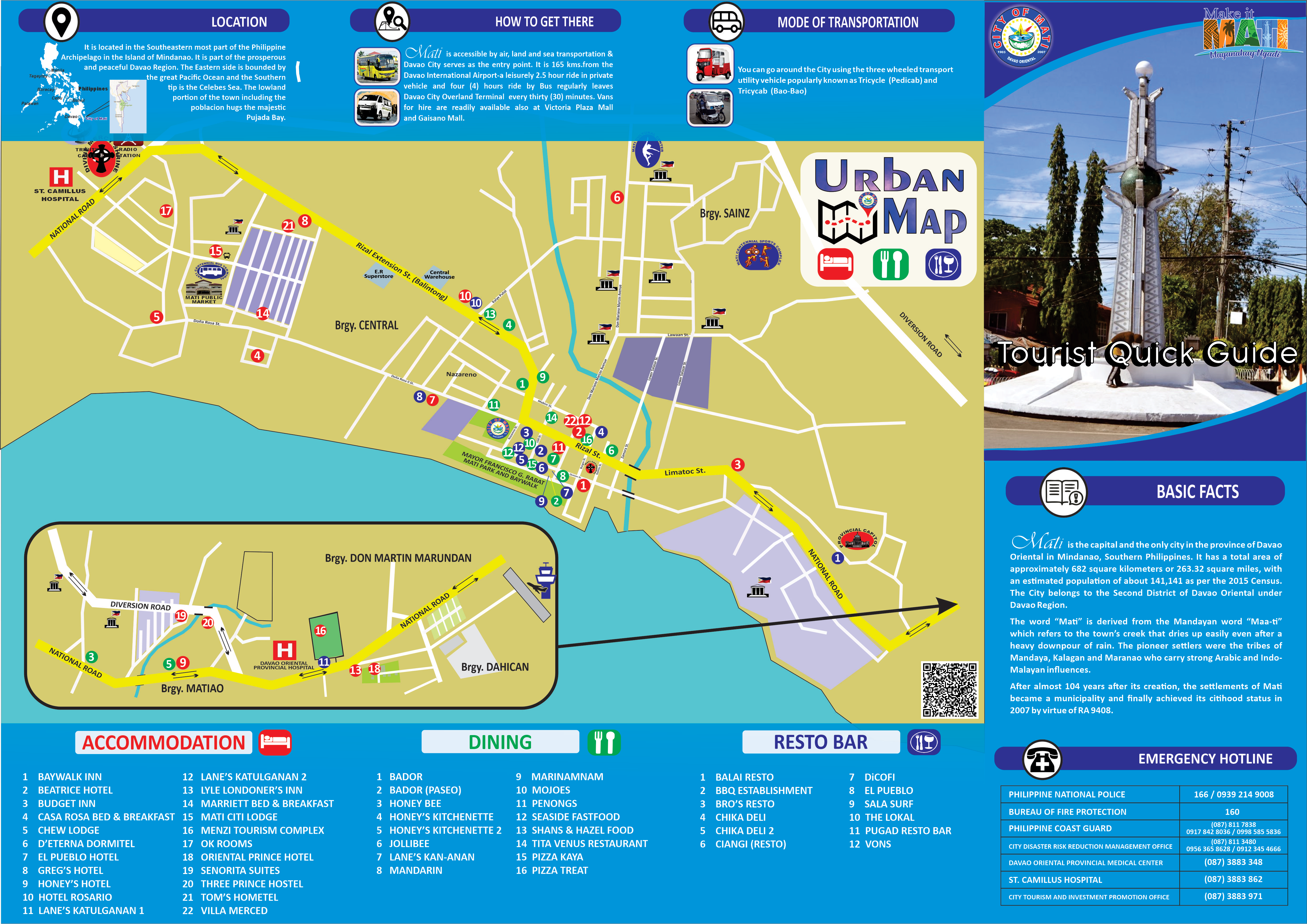 Mati is located in the Southern most part of the Philippine Archipelago in the island of Mindanao. It is part of the prosperous and peaceful Davao Region. The Eastern side is bounded by the great Pacific Region and the Southern tip is the Celebes Sea. The lowland portion of the town including the poblacion hugs the majestic Pujada Bay.

HOW TO GET THERE

Mati is accessible by air, land and sea transportation and Davao City serves as the entry point. It is 165 kms. from Davao International Airport-a leisurely 2.5 hour ride in private vehicle and four(4) hour ride by Bus that regularly leaves Davao City Overland Terminal every thirty(30) minutes. Vans for hire are readily available also at Victoria Plaza Mall and Gaisano Mall. 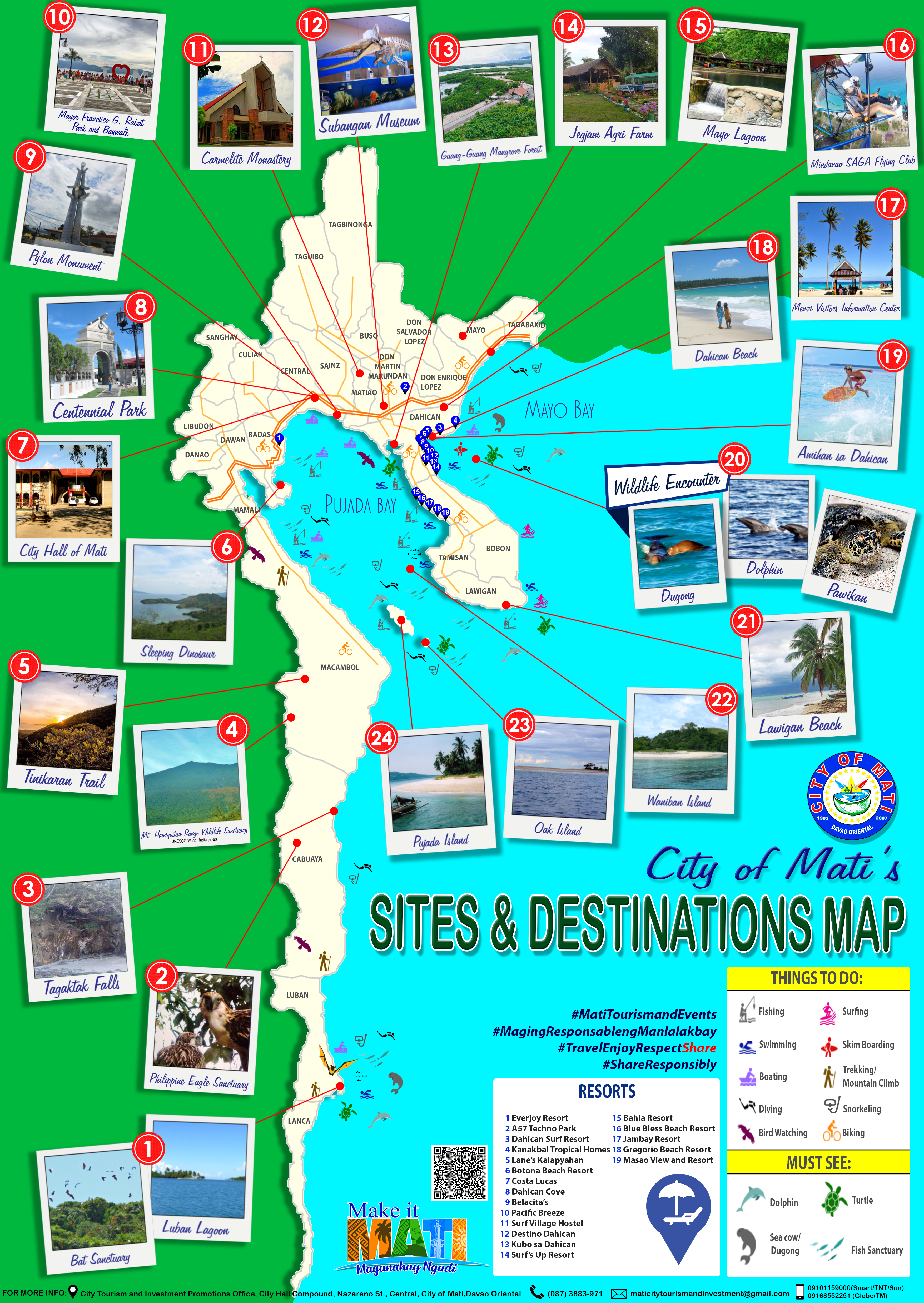 Tinikaran Trail is located at Darrport in Sitio Catmonan, Barangay Macambol. Tinikaran is part of the Hamiguitan Range and it’s a perfect hiking place on a knife edge Tinikaran Peak and home to hundreds of Bonsai trees.

Mindano SAGA Flying Club operates at Mati National Airport in Barangay Dahican. Mindano SAGA Flying Club(MSFC) is an Ultralight aircraft flying facility that offers trial flights and flying lessons. MSFC has introduced a safe, affordable, and an exciting way to see the majestic scenery of the city like no one has seen before.

Wildlife Encounter of Dugongs, Dolphins and the Pawikans(Se Turtles). Sightings of the aquatic wildlife can be experienced along Pujada and Mayo Bays. In Dahican precautions and responsible watching of Pawikans and it’s hatchery along the shorelines.

Dahican Beach is becoming the skimboard capital of the Philippines. It is characterized by whitesands and oftentimes strong winds making it ideal for skimboarding and surfing. Dahican is the venue of one of the biggest Mindanao party events, the Annual SummerFun in Mati.

Amihan sa Dahican is one of the top beach destinations where people can enjoy themselves at the beach while learning skim-boarding and surfing. The people in Amihan are also dedicated into protecting marine wildlife within the shores of Dahican.

Lawigan Beach is a fine white sand beach and marine protected areas nearby a perfect for diving and swimming experience while captivating a nostalgic view of Mt. Hamiguitan across the blue oceans of Lawigan.

Waniban Island is a small island comprising 3 hectares is also ideal for picnic, swimming and sunbathing. It is a great place to walk around and experience the serenity of the place where you can literally go around the island in a span of 36 minutes.

Oak Island is often called the vanishing island which is located in Barangay Lawigan. This islet of white sand is only visible during low tides and dissapears during high tide

Pujada Island is a 156-hectare island located at the entrance of Pujada Bay in Barangay Lawigan. The island offers raw and natural wonders where modern facilities are yet be seen around.

Sleeping Dinosaur is a natural attraction that is approximately 579 hectares situated at Sitio Baso of Barangay Badas. It is visible upon passing the 8 kilometer winding road of Badas going to Mati from Davao City.

Subangan Museum showcases the rich heritage and diversity on everything Davao Oriental has to offer. It also offers an exhibit on events and effects of the horrendous Typhoon Pablo (Bopha). The main attraction includes “Davor” a complete skeleton of a sperm whale weighing 20 metric tons at 53 ft. long. Davor originally found dead believed to be drifted in the shore of Governor Generoso, Davao Oriental.

Pylon Monument was built more than 50 years ago and it serves as a gateway of Mati’s commemoration. The inaugurated PYLON of Mati, erected in memory of the late Mayor Luis G. Rabat. This is a symbol of the people’s faith in a responsive government.

Guang-guang Mangrove Forest is a Sea Turtle and Mangrove Nursery which is a joint project of the Guang-guang Community and the DENR as the habitat of the Marine Lives Conservation. It is located at Barangay Dahican which is a few stretch away from Davao Oriental State University.

Mayor Francisco G. Rabat Park and Baywalk is where the people of Mati converge to seek relaxation with family and friends, or simply enjoy the cool breeze of the morning sun overlooking the bay, or the stunning postcard-like view of the sun as it sets behind the mountain. It is also where important events in the city are being held. 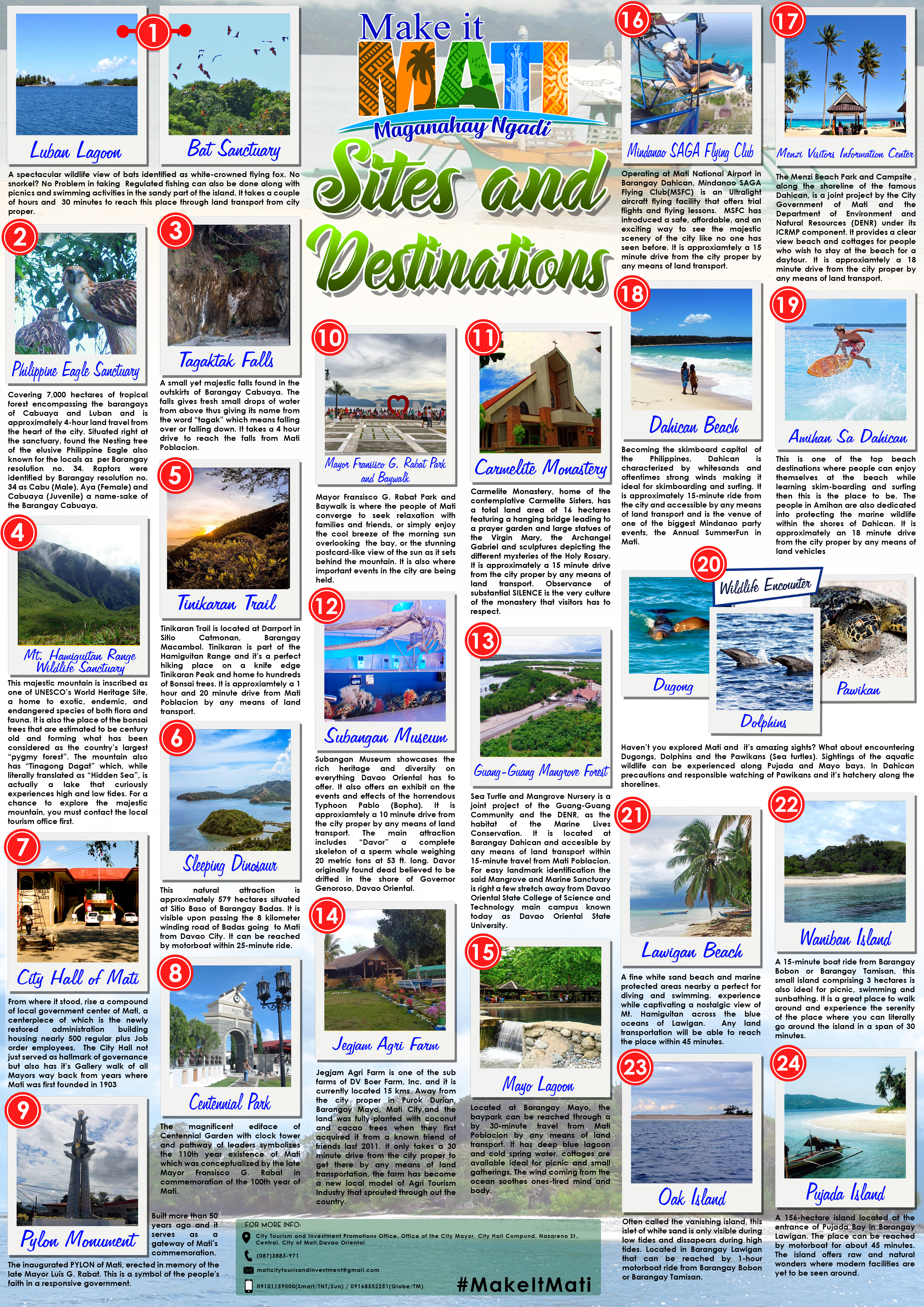