Mati, officially the City of Mati, and also referred to as Mati City, is a 5th class city and the capital of the province of Davao Oriental, Philippines. According to the 2015 census, it has a population of 141,141 people.[4] It is located on the south-eastern side of Mindanao.

Mati is politically subdivided into 26 barangays.

Captain Prudencio Garcia, the pioneer political-military head in 1861, and his comrade Juan Nazareno founded Mati and two other towns in Davao Oriental. By 1903, Mati was declared a municipality by virtue of Act No. 21. By 1907, Act No. 189 further reaffirmed the establishment of its local government. Bonifacio Serrano was the first appointed mayor while the first elected mayor was Patricio Cunanan in 1923. Mati became the capital of Davao Oriental since 1967. 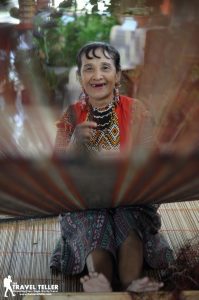 Mati comes from the Mandayan word Maa-ti which refers to the town’s creek that easily dries up even after heavy rain. Pioneer settlers were tribes Kalagan, Mandayan, and Maranao which carried strong Arabic and Indo-Malayan influences.

Cebuano is the most widely spoken language and the corresponding ethnicity (which includes the Boholano subgroup) accounts for 71.55% of the total household population according to a 2000 census. Mandaya ranks second with 12.74%, followed by Kalagan with 6.87%. Most residents of Mati are descendants of migrants from the Visayas who came for employment opportunities in logging, mining, farming, fishing, trading and teaching.[11]

Roman Catholicism is the major religious group, comprising the 80% of the total population. Islam comes in second with 8 percent, Iglesia Ni Cristo comes in third comprising with 6 percent. A small number of believers of other Christian groups like the United Church of Christ and Seventh Day Adventist are in the city as well.[11]

The Cathedral of San Nicolas de Tolentino is the center of Diocese of Mati under the jurisdiction of Roman Catholic Archdiocese of Davao. Two parishes are in Mati: one in the town center and one in Brgy. Dawan. [12] 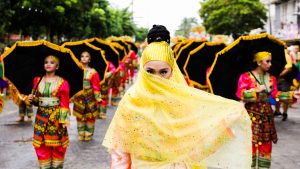 In years, both festivals have become alternative tourist destinations as competitors from various regions in the country start pouring in for competitions like streetdancing, boat racing, skimboarding, and frisbee.

There is also a seaport in Mati. The Mati Seaport in Pujada Bay is one of only three seaports in the whole province of Davao Oriental.