Back to The Government THE MAYOR 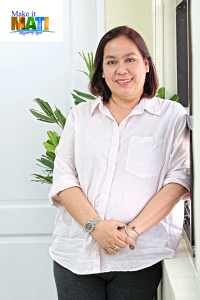 Born on February 1, 1963, Michelle Marie Denise Nakpil Rabat was raised and educated in Manila. On the year 1999 she came back to her parent’s beloved home town in Mati, Davao Oriental to help her father in the public office that paved way to her present life in government service.

Mayor Michelle is the only daughter from the five children of former Governor and former Mayor Francisco Garcia Rabat and former Miss Philippines Edith Nakpil.

Mayor Michelle inherited a heart for public service and the love of country from her ancestors who helped shape the history of the Philippines.

Her mother Edith was the daughter of Juan Nakpil, National Artist for Architecture, and Anita Noble, the first Miss Philippines of 1929 (Carnival Queen).

Edith was the grand daughter of Gregoria de Jesus, widow of Andres Bonifacio, and Julio Nakpil, patriot and musical artist. A member of the Katipunan, Nakpil wrote nationalistic songs, including the lyrics of the national anthem. (Philippine Star, Dec 16, 2018.)

Mayor Michelle’s father, Francisco “Paking” Rabat, was a basketball star in the 1950s and a member of the Philippine Team to the 1954 World Basketball championships that won 2nd place and the bronze medal in the Rio de Janeiro, Brazil Championships.

Rabat was called the “Rajah of Rebound.” He died in 2008 at the age of 74, after serving Davao Oriental as its governor, and then later on as mayor of Mati City. (www.choosephilippines.com, retrieved as of July 15, 2019)